Where were we? Ah yes, Dallas. We were actually staying in Lavon on a pretty little lake of the same name. Five days of sickness made for not a lot of adventure. Wesson managed to bash his front, permanent tooth on the slide at the playground just to add a little variety to life. Thankfully it did not fall out.

The last day in town we decided to go find something noteworthy to stare at. We ended up at the Dallas Museum of Art because the playground we were trying to go to was closed for repairs. Y’know what? The best places we’ve ever visited have been on the fly. The museum was FANTASTIC! It was such a diverse collection and it flowed well. It was very easy to walk through. Four floors of amazing pieces; from sculptures and paintings to furniture and clothing. Some pieces were thousands of years old. They even had some scavenger hunts for the kids to complete that brought them to some works they’d probably never have given a second look.

The most noteworthy finds for us were two paintings by Claude Monet. Mara had just been studying Monet and for her to find some water lilies made her day (and mine too). The visit definitely opened our eyes to the fact that we’ve been glossing right over the art museums and not giving them a chance. They’re on our radar now, and we’ll be making time. 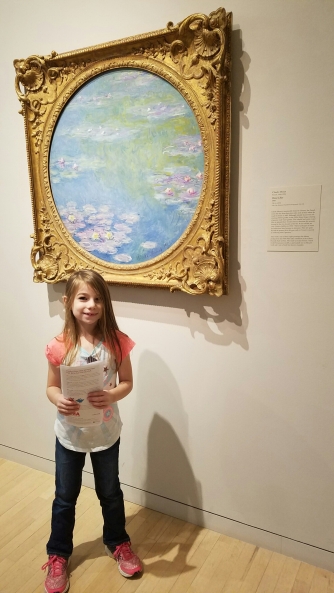 Next, we wandered over to Deep Ellum Brewery. The Deep Ellum area is a colorful neighborhood. There are murals and art installations all over and small businesses aplenty. The brewery itself was the work of some really creative minds. Take a look:

Sunday the 22nd we packed up and hit the road for some serious movement. The target distance is usually about 250 miles or less. That might not seem like a lot if you’re like us old people and you’re used to driving straight through, all night, 1,000 miles at a time to wherever you want for no apparent reason. With kids and house in tow this dance has become a lesson in patience. Get up at 0700, leave at 0900, get to wherever we’re going before 1600 and set up so that dinner can be made and bedtime can be standard. With these short jaunts somewhat planned out we were also able to fit in a little sightseeing at our stopping points.

The first hop was to a Texas State Park called Copper Breaks. This was a poor choice. The place was so damn beautiful and quiet and I wish we had not even stopped because I wanted to stay there much, much longer than the 17 hours we had allowed. The canyons were vividly colored with green copper breaks and red rock. A photo could never do it justice. I climbed atop the camper just to see as far as I possibly could with my camera.

The picnic tables were covered in these cute little teepees. 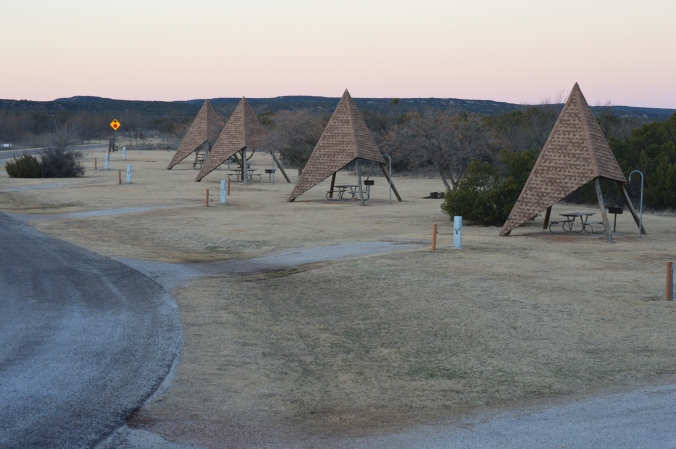 And the STARS! OH, THE STARS! The park was so black and the sky was so, so bright. It felt as though anyone could have reached out and ran their fingers through the constellations. The only other people in our campground loop were the camp hosts (from Minnesota) who could not have been nicer. I’m actually disappointed that we didn’t get to hang out with them a bit more.

Our next stop was supposed to be Amarillo, but when we checked the weather our entire route was being bamboozled by weather that was not conducive to hauling your house behind you. Amarillo had 55 mph winds, Albuquerque had snow, White Sands was supposed to be 45 degrees… if only somebody had checked the weather before we left. Way to go, self. So, we sadly routed ourselves to Elida, New Mexico instead and turned on the seat warmers. We got about 30 minutes down the road a realized we’d have to go through Amarillo anyway. “Let’s just see what the weather is like when we get there.” It was WARM and SUNNY! It was a tad windy, but who cares?! 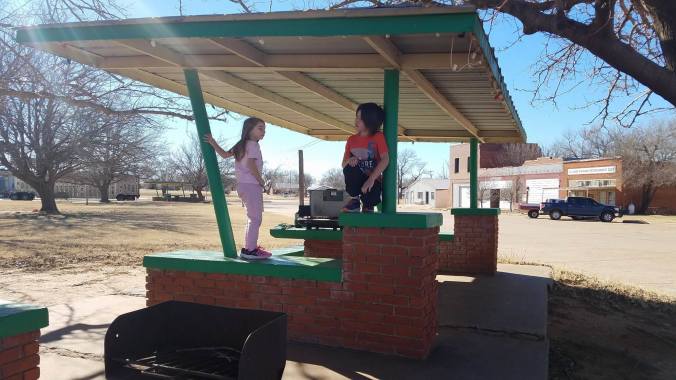 On the way we stopped at a little town square to eat lunch. It was the town of Estelline, Texas, population 136. It was the perfect set-up for us. Big, wide streets for the camper, a picnic area for lunch time, and space for little people to run in circles. It also had a post office with extremely inaccurate scales. That’s scales, plural. We kept our mail that day.

We pulled into a little campground named A-OK that was on the outskirts of town. I never saw another set of people in this park, FYI. Payment was on the honor system: cash through the slot in the door at whatever rate you chose off the list. The place was covered in dog poop.

They had a menacing looking emu (truthfully they always look menacing), a donkey, and two alpacas behind a suggestion of a fence. They offered a full hook up for less than $13, though, so I really can’t complain too much. It was A-OK.

We did some super cool stuff in Amarillo and I’ll tell you ALLL about it after bedtime. Or tomorrow. Maybe Friday?