Ten years ago today we signed some fancy paperwork in front of a few people. It was a small group: Justin and I, a judge, two wonderful friends (who were so much better dressed than we were), and a newborn baby. He didn’t care that his parents should have gotten married two and a half years earlier like they said they were going to, he slept through the whole thing like it didn’t even matter. Pfft. Children, right? We took no photos that day, and honestly I don’t really regret that. It was our day, it wasn’t meant for anyone else. I remember it, and he might, so that’s good enough for me.

Well… there are these mediocre Sears portraits of us in our “wedding shirts” a few months later: 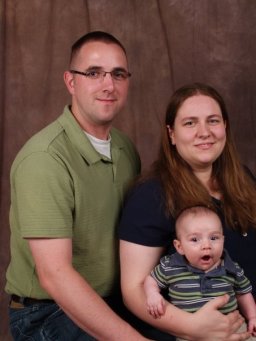 We’ve actually been together for about a minute over fifteen years. He decided that he needed to work closer to home, transferring into my department, I made some cookies, which were apparently fantastic, and then the rest is history. I may have skipped a few things but if you know us, you can fill in the blanks. 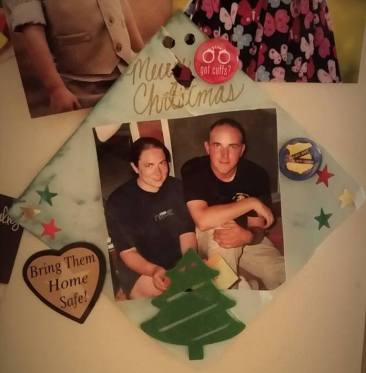 This is the earliest photo of us that I could find. He was getting ready to go to Iraq with the Marines, I was sunburned, it was June. He left in July. I didn’t get to see this photo until he brought it home from halfway around the world. While he was there, his family sent this ornament (something I am grateful for) to adorn the Christmas tree his unit had set up. I keep it now as a reminder that this life could have been so, so desperately different.

So why am I writing a vague blog post to you on this, the day of our 10th and/or 15th anniversary? Because you should know how wonderful this person is and how important he is to me. He volunteered to be a target for 16 years, facing the worst of the worst in multiple countries, and now he washes the dishes every night so I don’t have to. He grinds my coffee by hand, one cup at a time, every morning. He once defended me against a group of guys at a music festival by just looking really mean and making them run away. He also worries about babies judging him. He is 100% in when I have a crazy idea (ok, maybe 90%, depending on the situation). He laughs at my dumb jokes and listens to my mostly ridiculous rantings. He somehow always beats us when we play Monopoly. He homeschools his two clones. He makes beer, he makes adorable babies, he makes dreams come true, he makes things work properly by just being in the room (witchcraft, probably), he makes time for his family, and he makes us happy just by being himself. His presence is always a gift.

We’d have never guessed this is where we’d be in life had you asked either one of us back in 2004. There was no way we’d be living in Michigan again, or could have ever possibly imagined a scenario where we’d be retired in our 30’s. I know that I use the word ‘adventure’ way more than I should, but man, what else would you call it? This hap-hazard adventure has been amazing, and unpredictable, and – at only 15 years in – is just getting started. 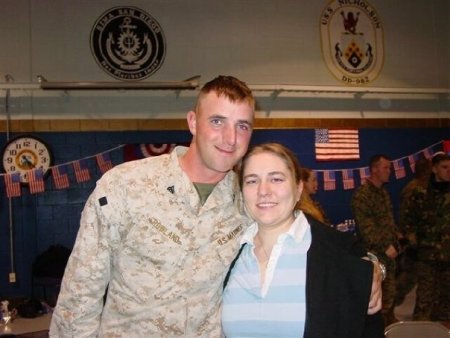 I’m eternally grateful that I get to live this roller coaster of a life with the one person who makes it all worth while.