There are few constants in our lifestyle, and really that’s part of the draw. We move, we travel, we explore, we end up lost but always find our way back to the sanctity of our rig (wherever it may be). On February 7th, this way of meandering just about brought this grand experiment to an end.

During the week prior to our entrance into Arizona, Justin had been plotting. He desperately wanted to hit a new trail of some sort. He always wants to go out exploring on his bicycle, find fun trails, and maybe try to throw himself over the handlebars.  I think if he were able, he’d be GO! GO! GO! on that bike 24/7. He totes mountain bike wheels with him as we travel (they lay across the bed on moving days, so glamorous) and really he had only used them once – in Michigan. Imagine his excitement when he found a trail that intrigued him that was on an actual mountain! Dreams come true! Pining over the planned excursion had him just about bursting with energy. All the plans and pining would prove to be almost pointless.

I don’t think I mentioned it yet but we were staying about 20 minutes from Tombstone, Arizona at one of the Encore parks. We stopped there last year for a hot minute and stayed at a resort park with an observatory that shall not be named. This visit we did not see a lady wearing a towel on her head, smoking a Pall Mall, fighting a cat on a leash. I know, disappointing. I did, however, have a run-in with a guy who followed me around after I accidentally went into the men’s room when I thought it was the laundry room even though it was clearly marked and I’m apparently blind. All I wanted to do was leave packages of new, giant underwear on the laundry table so they’d find a new home. Anyway…

He set out that day at noonish, maybe later, and called me at 1:30pm to let me know he was there and ready to ride. The kids and I continued with our day indoors. We were not as motivated as the mountain biker and were content to be truck-less and lazy. About 4:45pm the phone rang.

“It’s gonna be a while.” Justin said. This golden trail on the mountain – this bicycling ADVENTURE – was, apparently, not well defined. Only small parts of it were even ride-able. Of the 25 miles he was supposed to traverse, he’d done about 15. Too far to turn back and really fighting the clock and the sunset to get through the last ten. I did as much pep-talking as I could and told him to scoot.

About fifteen minutes after that, I got another call. “I really just don’t know where I am.” Hmm, no. We talked about what to do, what he could do, and what could possibly be done from where I was. Some people will tell you to stay put if you’re lost, because then there’s a better chance of someone finding you. He was not prepared to spend the night on a mountain, though. Ultimately, I vehemently encouraged him to keep moving, keep heading down the wash he had found, and he’d be clear eventually. It was his only hope of not spending the night in the trees. He did not sound encouraged but promised to keep going. He said he was going to send me photos of where he was currently so if it became an issue there’d be a place to start. This was a TERRIBLE idea. Cell service was spotty and this killed his phone immediately. Now, he’s stuck on a mountain with no map, no phone, and 45 minutes before real darkness was to set in. There are no streetlights in real nature, people.

I messaged a friend who I knew had been rescued at one point, half-jokingly but totally not: “How much does it cost to rescue a mountain biker who got lost in the woods?” She called me immediately. After we talked about it, she convinced me to figure it out NOW while there was still daylight to be had. She reasoned that if we were to wait until it was already dark that the search and rescue team would just wait until morning.

While I was calling about ten different numbers trying to figure out who does what, Justin was plodding along. He was now CARRYING his bike along the craggy terrain, literally slicing all of his exposed skin to shreds in the brush. He said at one point he seriously considered leaving that not-so-cheap bright orange Trek bicycle laying against a tree because although it only weighs a few pounds, a few awkward pounds get heavy when you have to heave it through the brush. He didn’t think he’d make it off the mountain before dark if he had to carry it.  Really think about this. He’s now in survival mode. Would you be strong enough to leave behind one of your prized possessions – and your mode of transportation – for the sake of survival? About that time he ran into a herd of cows. What?! Who leaves their cows on a mountain?

It’d be a shame if I RAN YOU OVER

These were not savior cows, they were jerky cows who initially refused to get out of the way no matter how much prodding and yelling was had, then stampeded by him in a violent fashion. Thanks for nothing, Elsie and friends.

Meanwhile I had finally gotten someones cell phone number who then gave me the non-emergency number for the sheriff’s department I needed. Name, phone number, description of the person and his belongings, address… “Wait, you’re from Michigan? WHAT THE HELL IS HE DOING OUT THERE?” As I tried to explain it, he sighed. They’d start moving people.

Ten minutes later another Deputy called me instead of Justin by accident. Not the vote of confidence I needed but it was a productive conversation. We discussed clues Justin had given me as to his whereabouts and possible outcomes to the many scenarios. He told me he’d call when they figured out anything at all. The Deputy pinged Justin’s phone right after this and found him in the middle of nowhere. Nowhere near a trail, or road, or known areas. SOMEwhere, but also nowhere. Memories of speaking to a park ranger last year about how they had to call in the Navy to rescue someone from the volcanic fields in northern New Mexico rattled around in my head.

As darkness set in outside there was literally nothing to do but wait.

Right before it became so dark outside you couldn’t see your hand in front of your face, Justin miraculously made it out of the mountains of his own volition. He was still desperately lost. At least he wouldn’t get eaten by a mountain lion? As soon as he hit the small dirt road he took off like a lightning bolt in a random direction. No map, remember? He found houses that were away from the road, not something you really want to ride up on in the dark. He stopped at every house and yelled to them that he needed help, but he never saw any movement. Finally, after miles, he came across a ghost town. No, really. It was on a road called Ghost Town Road (that’s how you know it’s authentic). As he sat there and pondered in what direction to ride or what to do in general he saw headlights. Could it be?! YES! People! He flagged down two gentlemen in a truck who just happened to be headed through that area and were eager to help a lost soul. They were able to plug in his phone and get it working again. As soon as the phone turned on, it was the deputy calling.

“Where the hell are you?” Once they determined he was alive and well they started a deputy his way. The two dudes in the truck had to go but would be back that way in a few. When the truck pulled away and took it’s warmth with it, Justin realized just how cold the desert can be. Up until that point he’d be running on adrenaline and his motivation to get home. When the guys rolled by again, they found him to be a shivering mess. Thank you to the kind souls who wrapped him in a tarp and a jacket so that the Sheriff’s department wouldn’t have to bring me a popsicle.

Bedtime came in the camper for the two young adventurers. I hadn’t expressly discussed the happenings with them, as I really didn’t have any answers, and at that point I didn’t know if he was going to be home that night or if he’d be hardcore camping. They knew, though. The camper isn’t big and the story wasn’t hard to piece together from my phone calls. Mara had a fit first. Daddy was never gone at bedtime. He hadn’t missed a bedtime in years. To their credit they just can’t remember when Daddy worked every single night and Mommy successfully put them to bed without issue.

Suddenly, my phone lit up like Christmas! Text messages! And they were all from Justin! It was all those photos he was trying to send me earlier. 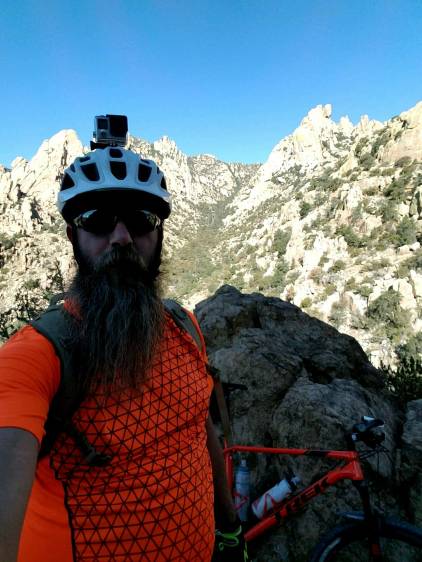 There was a selfie in there, but I decided to forgive him.

He must be back in cell phone range! And then the phone rang! HOORAY, HE’S ALIVE! A very brief “I’m good, a deputy is coming to get me” and I reassured the kids that Daddy would be home to smooch their little cheeks soon enough.

Nine hours after he had left, Justin climbed through the door, covered in cuts from head to toe, on the edge of exhaustion. He was home.

Damages were insignificant. Other than the many new scars he obtained he cracked his phone screen when the bike mount broke and shot it into the dirt. His Garmin watch said about 6,000 calories had been burned. Not the best fitness plan! In the days afterward I’d think of things he should take with him next time, like a battery bank or an emergency blanket. He stopped me at one point and said “No, you don’t understand. There won’t be a “next time.” It’s hard to admit your faults. Lessons were learned that day.

Neither of us breathed a word of the incident to anyone for over a week. I’m not sure why. Maybe it was just too scary to think about all the what-if’s. I haven’t had to worry about him so much lately since he’s not with the police department anymore or out in that other desert with the Marines. I’m out of practice.

We’re eternally grateful for those two guys in a truck, and the Sheriff’s department who ultimately came to rescue him from nowhere, and even Alisa who told me to get my shit together while the day was young.