Have you ever tried a jackfruit? Here I am assuming that you’ve seen a jackfruit or even heard of them. Hang on… 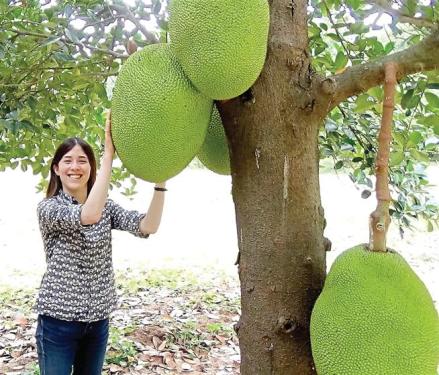 So, that’s a jackfruit, and a lovely woman (left) who sells their innards in Colorado. The only reason we ended up with a small portion of this gargantuan wonder is because I’ve been shopping at a really interesting fruit market in Redford called Randazzo’s. Every time I go there I get all the “normal” stuff and I also buy something unusual for everyone to try (I’m currently harboring a persimmon that I haven’t gotten around to figuring out). Anyway, it took me a good long time to be brave enough to tote home some jackfruit. As I pushed my cart through the market, I was stopped at least four times by others who weren’t brave enough to procure their own but had to ask me how it tastes. “We’ll see!”

I’m happy to report that it tastes exactly like Juicy Fruit gum. We ate fist-fulls of the ultra sweet bulbs of goodness. It had kind of a rubbery consistency and is apparently a good meat alternative when picked before ripe, although we haven’t ventured down that road. It was a yummy adventure that we didn’t even need to travel for, and overall broadened our palates by trying all these new foods. Bonus! 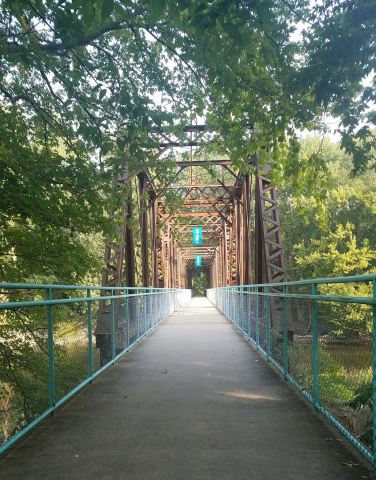 Along with strange fruit, September brought us another trip to Grand Rapids while our camper was supposed to be in the shop. We were there for a week and they never did the work but if I start telling you about that I will probably set this keyboard on fire. Instead I’m going to tell you about the awesome bike trail over there. I’m pretty sure that we’ve talked about Kent trail before when we were marooned at Aunt Terri and Uncle Tom’s house for a month. It was also the dead of summer there and ultra hot. This time it was cooler weather and SO GREAT. Justin rode his usual billion miles. I ended up riding the farthest I ever have at 15.08 miles! I had it in my head that I was going to ride out to the bridge he and Stacey were always talking about. It was totally worth it.

so peaceful and still

While we were in town we also met up with Justin’s parents for some Craig’s Cruisers madness! 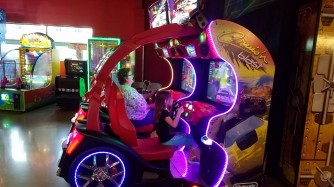 The kids LIVE for go-karts, I dread when they get their licenses. Maybe we can turn them into race car drivers.

Along with the super fun go-karting and lots of arcade games we divided into teams for laser tag. The boys kicked our butts. *womp womp* It was still a fun day with Grandma and Grandpa!

I’m going to tell you about this fruit market only because I never want to forget where it is or what it’s called. I actually stopped there to buy green peppers. This is what I ended up with:

Look at all those bombers! The 2015 Alaskan Smoked Porter! The Expedition sixer! ALL THE WOOT STOUTS! SO MUCH BARREL AGING! As I was loading my cart like a drunk kid in a candy store the owner loudly proclaimed “BEST SELECTION! IN! AREA!” in the most wonderful accent possible. Thank you, Ken’s Market on 28th Street, for selling the fruit I’ve always wanted.

September was also a pain for some of us. Justin had a septorhinoplasty (nose job) at U of M hospital in Ann Arbor. It’s been a long time coming, as he broke his nose as a young child. My parents were kind enough to hang onto the little children overnight and all day so that we could be at the hospital at the crack of dawn. This was their first sleep “away from home.” I silently had a cow to myself while the children were just excited to be somewhere besides the camper AND with Grandma and Grandpa. Like we haven’t spent the entire summer sleeping in their back yard or anything…

Justin survived the face assault and was eventually happy with his less crooked nose and extremely open airway. The first few days were murder. Once the doctor removed all the hidden baffles from way up in there life got more awesome. We won’t talk about me elbowing him in the face. For the record it was an accident. It had nothing to do with Ken and his wondrous market.

The surgery was on the 22nd and by the 29th we were at Legoland Discovery Center in Auburn Hills if that gives you an indication as to how he was feeling. We took the kids out for a day of fun because they’d been patient with the surgery nonsense, and we still have those pesky/handy Merlin annual passes we bought in California. We were able to play at Legoland… 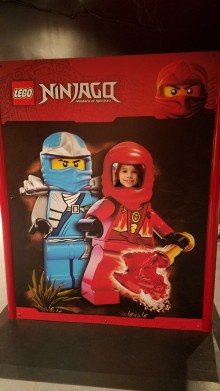 I used one of my natural selfie sticks to take this

After we did all the super sweet “free” stuff we had a great dinner at Rainforest Cafe! (allergy friendly, FYI) 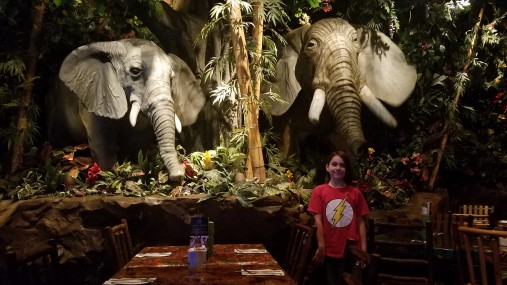 We’ve been there several times but this was the first time Mara vocalized that the animals were really creepy. They totally are, girl. Maybe that was our last Rainforest Cafe meal.

Judging by their little smiles I’d say they had a great afternoon! They were dragging their tiny feet by the time we made it back to the truck. I’m surprised that they didn’t fall asleep on the way home. We hope that you had fun, kids! You always deserve it!