I’m reading a book at the moment called “Write is a Verb” by Bill O’Hanlon. This is the same guy that wrote “Do One Thing Different” and was on Oprah, etc. It spoke to me from the library shelf as I was perusing non-fiction for brain food. I don’t know that I really wanted a book on writing. As it turns out, I really needed one. This blog doesn’t get nearly enough attention as it is, and I have had zero motivation lately to put pen to paper, or fingers to keyboard, if you will. One of the points that O’Hanlon has repeated is that writing begets writing and not writing begets not writing. If you need to motivate yourself to write, sit down and do it. The only thing that is stopping me is me. I started this project to make sure my kids remembered their epic (or not so epic) journey. I’m not doing them any favors by sitting on my hands and ignoring the goal. Look at that! I just wrote 157 words. It’s already working!

And here I am, three days later, coming back for a second paragraph. So… maybe there’s still work to be done. Currently I’m in the back yard at my parents house as Wesson and Mara read a book while inside of a big, dry pool.

They’re in the summer reading program at the library. Wesson is kind of a reluctant reader as of late but once he can be convinced to pick up a book he’s in it for at least an hour.

Three more days have passed by and I still haven’t finished this post.

And add another week…

*deep breath* Where did I even leave off last time? HOLD PLEASE. Ok, the last post has been re-read and we are ready!

We took ourselves back to East Michigan so that Mara could have an appointment with her new allergist. Normally this would be just a check-in/check-up if we were still in Kentucky. This visit, however, we spoke to the new doc about getting into an immunity study and also our concerns that she may be allergic to tree nuts. Good new/bad news? The good news is that she is NOT allergic to ANY tree nuts! HOORAYYY! The bad news is HOLY COW is she allergic to peanuts!!! The poked her arm with the peanut allergen goo and her whole arm started to turn red. They actually ended the test early. You know it’s bad when the nurse and tech turn white and whisper to each other “we have to stop this right now; she’s only six.” The doctor took one look at her arm and quickly but calmly asked if it would be ok to give her some Benadryl. They slathered her in calamine and  gave her sad, puffy arm a big ice pack. She got to pick lunch that day.

Now that we were back in town we got to go to unicycle practice again! It took the kids a minute to get their groove back but then they both started riding unassisted! And for more than one pedal! Here’s a short video of Mara riding! Look at that face! So much happiness! So many exclamation points!

Justin went out riding his bicycle in the park one morning and came home battered and bruised. He’d come around a corner, met a hidden staircase with the front wheel of his bike, and flew ass over teakettle. Maybe ass over handlebars is more appropriate. Just know that there was rotation and his bee-hind caught air. He admitted that he’d laid there for a good long while just taking stock of the situation. Thankfully he was not seriously injured and in an area where people are frequent. I don’t know how I would have found him had he knocked himself out. After a bike repair on the fly (HAH!) he gave up on the ride and wobbled the five miles home. The difference between he and I? I would have called for a ride.

Fourth of July was uneventful. It did manage to produce one of my favorite photos from this summer: 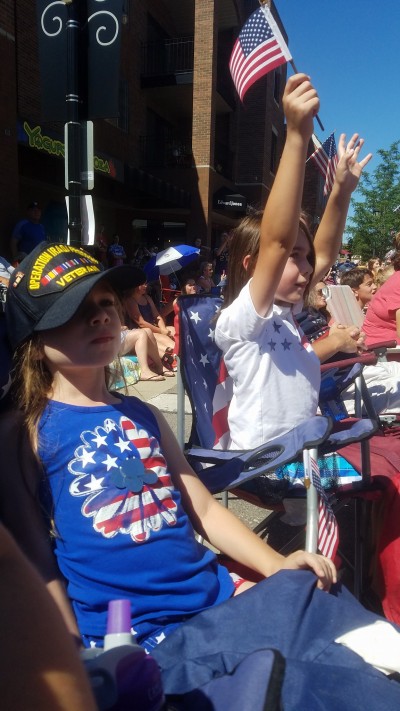 Wesson was SO EXCITED about the parade; arms up and flag flapping away, waiting on the next float/group/band, and Mara was… not. She told me later that she’d saved all her flag waving for the end.

We all went camping at Terry and Charlie’s that weekend after the fourth. They were kind enough to let us run rampant with their go-kart and let the kids check out all their giant farm equipment. Have you ever been atop a combine? They are much higher than anticipated. This exploration also included their awesome pull tractor and the mega giant wind turbines.

They look like they’re about to drop an album.

Once we got back from camping, Uncle Steve took the chirruns to Build-a-Bear because he’s the best Uncle Steve ever!

The kids also ended up in a three day thing at the library called World Builder’s camp. They had a blast! They were with the most diverse group of kids I think they’ve ever encountered. And, in Lexington, there were never more than a few kids at the library programs. There were at least 50-60 kids participating, probably more. They made crafts and played crab soccer and worked with their groups. They even had team cheers! They have always loved the library, and to be able to be LOUD in the library was a wonderful new phenomenon. I had a conversation with Wesson on the second day:

This kid will be a force to be reckoned with in a few decades.

A while back, some wonderful person came up with the idea of having a giant kite festival on Belle Isle and won a $50,000 grant to pull it off. Thus, the Detroit Kite Festival was born. 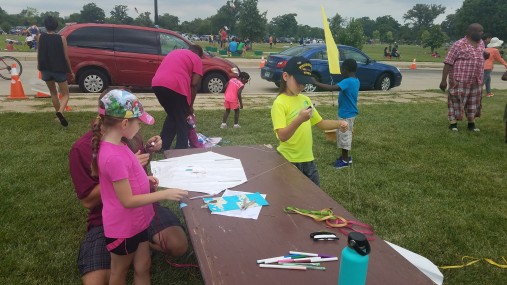 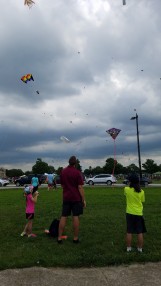 The Lexington kite festival was always a major disappointment so my expectations were not very high. It seems like I’m knocking Lexington a lot this week. I assure you that I do love Lexington, however they can be a wet blanket sometimes if its not horses or basketball. 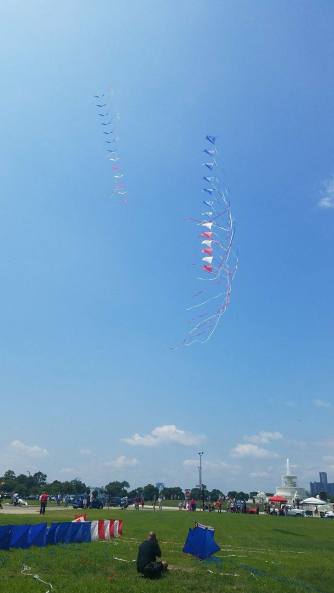 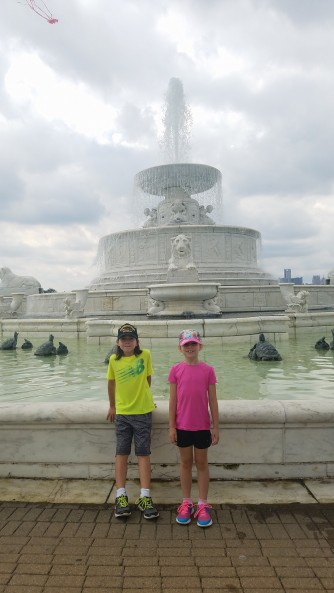 I do not exaggerate when I say there were at LEAST a THOUSAND people at this kite festival. The sky was FULL! Everyone had their kites up and flying, and they were all so different and fun! All of the kids were out there crafting free kites too! Everyone got to participate! There was even a stunt kite team that made their kites dance in the sky along with a musical soundtrack. With the river in the background, tons of wind, and plenty of sunshine, it was the perfect day and perfect place for this. They are calling it the inaugural kite festival, so look for it next year and don’t miss out on the fun!

Much like Wesson and his reluctant reading, once I sat down and committed to this post it all came spilling out! I have to stop myself now before I hit 1200 words. I just went back and edited and it’s now too late, I’m at 1253 riiiight here. I read something along the way that people hate reading blog posts beyond 800 words. I’m not sure if it’s true but I try to aim for that anyway. Hopefully you made it to the end of my meanderings!  Here’s one more sliver of nonsense: never buy apple scented dish soap. Ever.

Go out and fly a kite this week AFTER you’ve done one thing you’ve been putting off for a while. I’ll have a fresh batch of random thoughts for you soon!