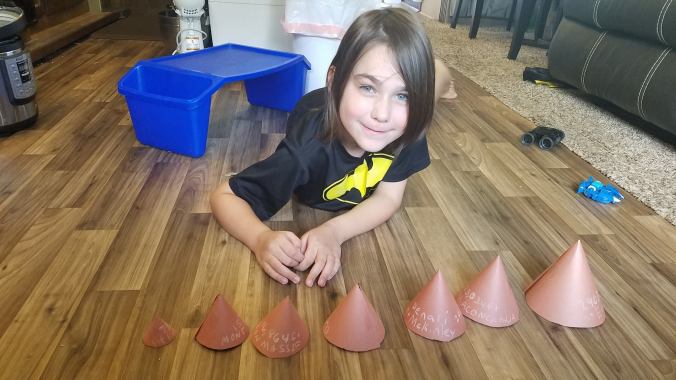 April 13th we headed down the road, high on all that sweet, sweet National Parks fun. We were finally going to experience something that we’d been talking about for an entire year: The Musical Highway!

“…the New Mexico Department of Transportation (NMDOT), along with the National Geographic Channel, had the idea to make a roadway that sings—literally. Enlisting the help of San Bar Construction Corp., a New Mexico-based company that designs and constructs traffic control devices and signs, NMDOT created a length of roadway between mile markers four and five that plays music whenever a vehicle drives over it.

But there’s a catch—the tune, in this case “America the Beautiful,” only works when cars are traveling at exactly 45 mph. The road’s purpose is twofold: to encourage drivers to stay the speed limit and to bring a little excitement to an otherwise monotonous highway.” – Source

You can hear our truck singing here. Pretty darn spiffy if you ask me!

That night we decided to boondock at another truck stop, this time it was a place called Russell’s. The building looked pretty ordinary from the outside. Once inside, though, you could tell someone had sunk their life into the place. There was a full 1950’s diner, complete with Coke memorabilia, black and white tile, and those awesome red and white seats. There were shelves all around the ceiling with model cars and trucks, and nestled in the back of the store was door to this: 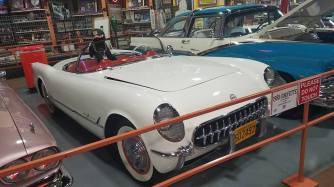 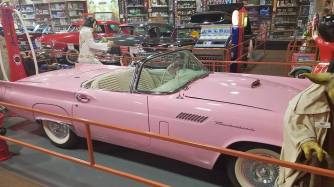 A car museum half the size of the whole building! It had about twenty classic cars, a few motorcycles, TONS of memorabilia from lots and lots of different areas. NASCAR, I Love Lucy, cartoons, brands, cash registers… There were even a few collections that were donated by people who liked the place. It was a really neat find! The open road seems to always hold surprises.

The next day started like any other. Wake up, pack up, hit the road. We woke up in New Mexico, we’d be driving through Texas, and we’d be in Oklahoma by dinner. Three states and two time zones in one day! It was mostly uneventful and peaceful save a few tiffs from the back seat.

When we got into Oklahoma and stopped for fuel Justin noticed that the wheels were streaked with some kind of fluid. Thinking that we’d busted a hub seal again we headed for a Ford dealership because the previous repairs are warrantied for two years. When we got into the dealership though, they had a much, much worse diagnosis for us. The trucks emissions system (EGR) dumped all of the coolant, and the head gasket had blown. If there was ever a time where you’d use the phrase ‘catastrophic failure’ this would be it. The truck was basically dead. To have Ford work on the truck would cost about $13,000 and that would be replacing the horrid EGR system with exactly the same parts, a recipe for future disaster. Luckily one of the shop guys also owned his own shop. He came out to talk to Justin and after a lengthy discussion it was decided that we’d limp to a campground and he’d come pick up the truck that night on a trailer.

We found a ridiculously affordable campground with a full hook-up in Elk City, Oklahoma called Elk Creek RV Park. You’ve heard of it, right? No? Neither had I until we were unceremoniously trapped there for a week. Their rate sheet was kind of comical. It was $35/night or $100 for the entire week. They cashed in on everybody who was just passing through, and that place was about full every night. Almost nothing exists in Elk City, there’s a Wal-Mart and a Bar-S hot dog factory. No problem, we surmised out loud to each other, we’ll just rent a car. This is how my conversation went with the townsfolk: “Well, Patty used to rent cars but she stopped doin’ it.” I called about four places who rented U-Haul trucks and no one had anything smaller than a 25 foot box truck. The nearest rental car place was 80 miles away and contrary to their well publicized slogan they will not “pick you up” when you are in the middle of nowhere. At least we still had our bicycles.

The second day in paradise I decided to go grocery shopping at Wal-Mart. For some reason I had it in my head that I was going to get everything we needed all in one trip. I set off on my new bike to save us all from starvation and had immediate regrets. 1) It was really windy, 2) There were hills, 3) The crank assembly on my bike started to come apart almost immediately. Any sane person would have turned around right here. NOT ME, THOUGH. 4) I had to ride in the road with the cars

And on the way back, I had all of these regrets PLUS: A) Looming threats of rain, B) A new bike basket that I had to hold up because it rubbed on my front tire, C) 80 pounds of groceries strapped to my back like I was a human pack mule

I walked some of this leg of the trip. I had bruises in my armpits from the backpack when I got back to the camper. I soothed my misery with the ice cream I had fat-assed all the way home. Justin was quick to point out that I had purchased expired bread. *SIGH*

Justin made several more bicycle trips to Wally World before the week was over – several more REASONABLY WEIGHTED trips.

Thankfully the Easter Bunny was able to find us while we were pretending to be Okies. 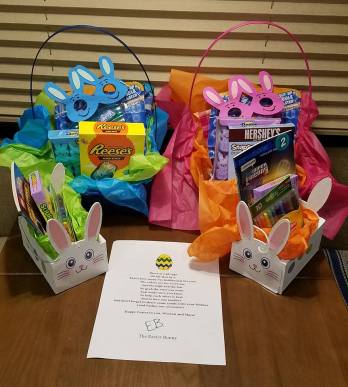 These bubble guns that the Easter Bunny left us were the BEST THING EVER. We’re still playing with them on a regular basis two months later.

The rest of the week was uneventful. The mechanic sent us naked chassis photos at one point.

So dirty! It took a whole week to get our chariot back in operational order but we had an incredible mechanic on the case. He was committed to the cause and did some things other mechanics wouldn’t have even attempted. We owe him our love and affection until the end of time. 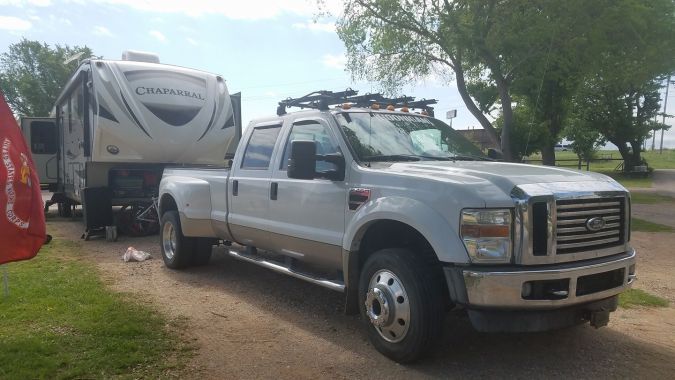 We bid adieu to Elk City the next morning in what turned out to be tornado weather. We enjoyed quarter sized hail and no visibility, rivers up to the tree tops, and an interstate that looked more like a parking lot – and that was just through Oklahoma City! By day’s end we were nestled in at an Army Corps of Engineers site to the north on a pretty little watering hole called Copan Lake.

I know that every sunset is technically the same sunset that the Earth has seen for billions of years. It still makes me happy to witness the process. Being able to watch the horizon meet the fire in the sky is a gift, it means that we’ve survived another day. After the week we’d had this sunset was well deserved. 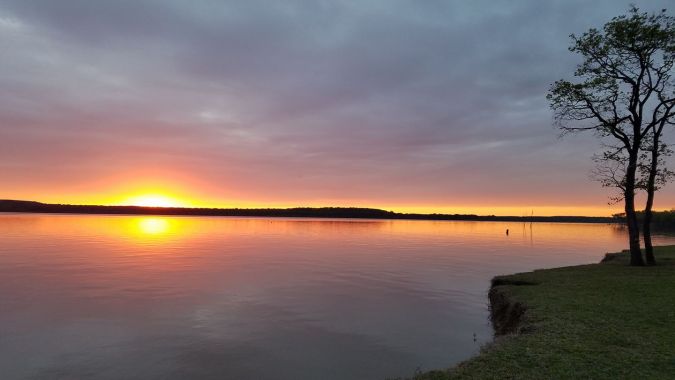 3 thoughts on “The Day That The Truck Did Not Survive”