“There is nothing so American as our national parks…. The fundamental idea behind the parks…is that the country belongs to the people, that it is in process of making for the enrichment of the lives of all of us.” – Theodore Roosevelt

Cousin Teddy had a way with words. According to the Ancestry.com app on my phone, Theodore Roosevelt is my seventh cousin, four times removed. Whether or not that’s true has yet to be determined but I like the idea. It gives me the notion that maybe the draw to explore these wild, wonderful parks is in our blood, and adventuring was our destiny all along. Also, maybe the kids are supposed to be presidents. Or maybe they should be photo-shopped riding atop a moose. Either or.

From the Dancing Eagle Casino we could extend our reach to three new places. El Malpais (mal pie EESE) National Monument was the next stop in our National Parks quest. Early explorers called this place El Malpais (which means ‘the badlands’) because most of the area is rough volcanic rock and their horses were unable to traverse the impossibly jagged ground. Honestly, people have trouble as well. We met the Chief Ranger for this area and El Morro and she told us about a man who was rescued from the area within the last year. It took them almost two hours to get to him on foot, and when they finally did reach him they couldn’t evacuate him. They had to call the Navy. Yes, the Navy had to rescue them from the middle of New Mexico. Not to discount the terrible experience for the man who was in trouble but hot damn, that had to be a cool rescue operation. The Chief said the planes whooshed by about 200 feet up from the treetops. I could tell that she was a little excited about it too. Good job, random unprepared hiker!

After we had explored the museum and completed our Junior Ranger program (YAY) we headed out to explore the park we’d just learned about. 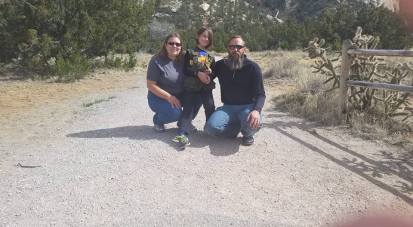 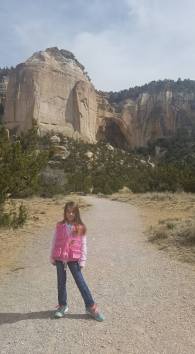 La Ventana Natural Arch was so high and gorgeous. We stood quietly for a few minutes (seconds probably) to just take in the surrounding and ended up hearing some elk honking away. Justin also thought that he saw a large cat up in one of the holes in the wall but I’m going to pretend that he didn’t.

We also drove over to the sandstone bluffs to look out over the lava field. Again, a moment you could never fully capture.

That little pool was teaming with life in the form of water bugs of various sorts, unaware that they are several hundred feet into the sky. I would have gotten a better photo of how high up we were but it was really windy and there is nothing to stop you from flying off into the lava rock. I’m adventurous but not stupid. Ok not that stupid. Ok, I wasn’t willing to go to the edge that day. Continuing…

The next day we drove in to Albuquerque to visit Petroglyph National Monument. It’s in a different kind of area compared to other parks. The pieces of land included in the monument have neighborhoods all around them instead of being out in the middle of nowhere. We were able to complete our Junior Ranger goals at the visitors center before we went out exploring. 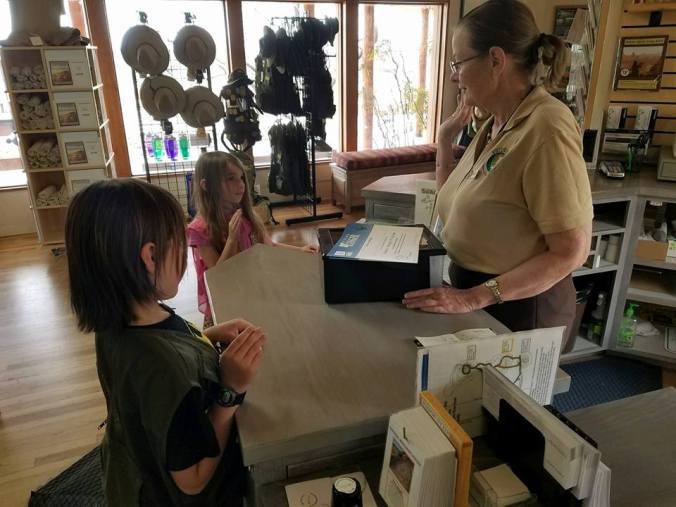 This Ranger was one of my favorites, as she was genuinely excited about ALL of the parks and not just her own. The rangers in general thought the kids were just awesome in their little vests covered in badges, clutching their Junior Ranger Camelbak bottles. We got a little carried away – but for a good cause.

The basalt rocks in this area have kind of a black varnish on them due to the desert environment and it provided ample canvas for the migrating travelers to etch a picture or two down to the gray basalt. No one is really sure what all of the glyphs represent and it’s offensive to ask the natives. We can only speculate what they mean. Some of them are obvious, like a bird or a snake. Others may have been placed there by ol’ Uncle Bob who wasn’t right in the head. We may never know.

We also went to a really cool city park in Albuquerque that had zip lines! The kids could have stayed there all night.

This area saw travelers of all kinds because it is the site of an ever present watering hole. People traversing the West could count on the pool at El Morrow which is fed from the runoff of melted snow from the cliffs above. The area is also significant because when people came through here they felt the need to write their names on the wall. 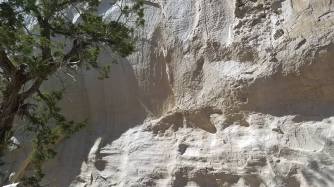 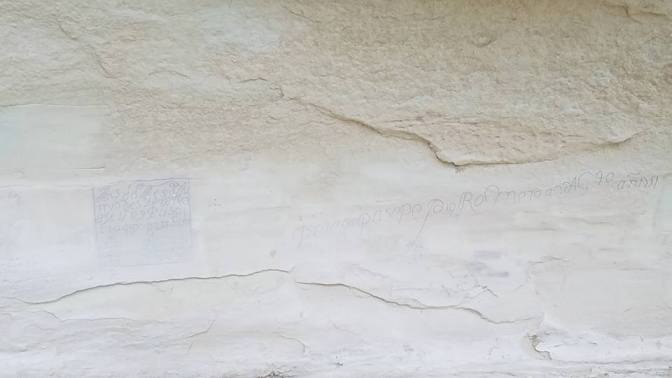 It’s pretty neat to see all the different names and such, and the park has done a great job at gathering information about a good majority of the people and including that in their self-guided tour.

I brought the selfie stick with us that day, a device that is incredibly superfluous yet fun to embarrass your family with.

I LOVE this photo of us for a few reasons. One being that it shows the pool at El Morrow, another being that it captured the moment right after Wesson had inadvertently punched Mara in the eye. Justin and I were smiling like fools, oblivious to the collision,  Wesson with his ‘shit happens’ face, and Mara mid un-grinning. Candid moments caught on camera! Thanks, selfie stick! Before you tell me what a crappy parent I am for getting the giggles when I look at this photo, she was fine. She didn’t even cry and I don’t think that her eye was that black.

We had done it! Six parks in six days, and six Junior Ranger badges! I just love what we gain from the programs. In fact, ANYONE can complete the program, it’s not just for children. I’m looking forward to seeing just how many parks we can visit before we stop traveling. Who am I kidding? We’re never going to stop.

“Travel makes one modest. You see what a tiny place you occupy in the world.” – Gustave Flaubert