Our second day at Disney was magical in its own way. It was dang near empty there by Disney standards. We rode all the rides we could stand and never waited more than 5-15 minutes each. The longest wait we had was for Anna and Elsa. 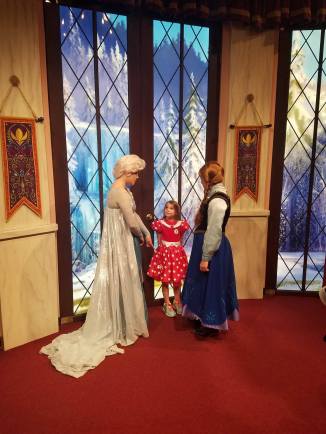 Between you and me, they were disappointingly bland. The other princesses had personality, these two were not as exciting.

Pictures! Same deal as last time, we were more worried about having fun than documenting the shenanigans. Here’s a few miscellaneous snaps. 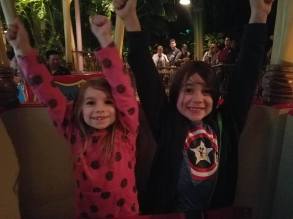 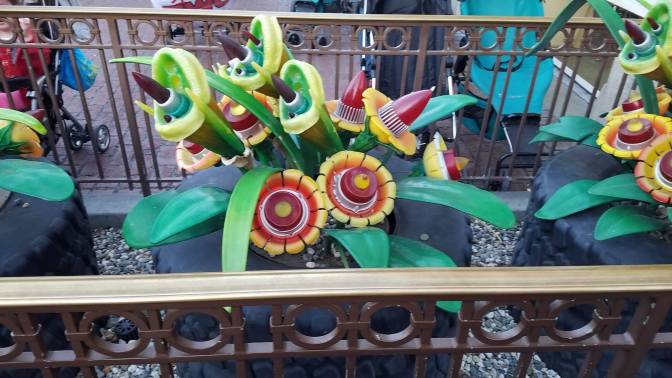 We met Mickey, Olaf, and Daisy!

And Minnie Mouse stole my child.

We were sitting on a bench when Minnie Mouse came walking by and Mara stood up. Minnie grabbed her hand and they both walked away!!! Justin and I looked at each other in shock, then had an “oh shit” moment like we forgot that we should probably follow them. When we caught up with them Minnie had found a spot in the shade to greet people and was interacting with Mara. The introvert had been kidnapped by a giant mouse and Did. Not. Care. She didn’t even know that she was “missing.” Her love for Minnie transcends all common sense. 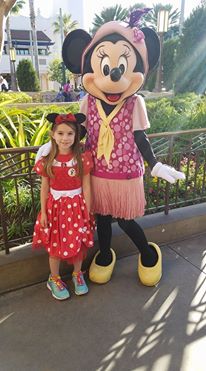 Wesson got this sweet hat, complete with his name stitched on the back. He was pretending that he was an airplane. Goofy would definitely approve.

We ran into the very fun green Army men who had a little mobile dance party/cadence deal going on. 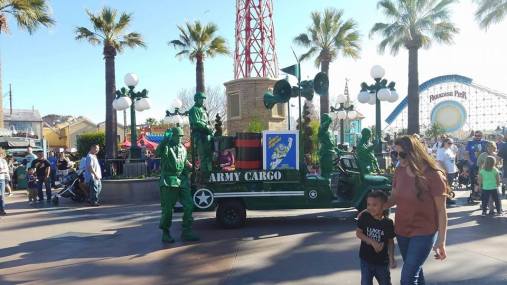 It was a great day! Disneyland and California Adventure far surpassed my expectations and the ridiculous price was worth every penny. There will definitely be a next time.

Another one of our fabulous birthday events was a trip to LEGOLAND! Wesson has been looking forward to this for years. He spent the day before we went randomly grabbing us and screaming “WE’RE GOING TO LEGOLAAAAAND” while simultaneously shaking our shoulders.

They got fancy new Lego Batman shirts to commemorate the day. We were about five seconds into the park when we walked right into this:

BATMAN!!! So, the kids were totally geeked. I was fairly horrified by the giant Lego Dark Knight. AND THERE WERE MORE…

Umm, do you see Unikitty? That was NOT a statue. There was somebody INSIDE that suit! I desperately wanted to stand around to see them try to walk out of the area but that probably would have scarred the children. Nobody cares that I’ve been scarred, though.

What’s more scary than giant people with claw hands? It turns out that it’s real people. 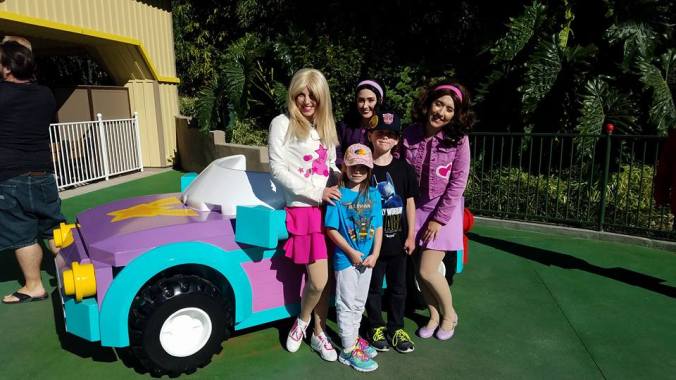 These are the Lego Friends, and Wesson thought they were great. Mara was unsure about their validity, as the rest of the Lego characters actually looked like toys. Real people were not in the grand plan, yo.

Just like our two Disney days, we planned ahead! We were there on a week day so the lines were non-existent! The kids got to ride nearly every single thing, and most of it they were able to ride on their own. The rides there are pretty tame, made for the under 12 crowd. They chose to stay off the roller coasters and we walked past a few spinners we knew they would hate.

Wesson got a Happy Birthday button from member services when we walked into the park, and just like Disney every staff member we passed had a birthday greeting and a kind word for him! He had big smiles all day long. 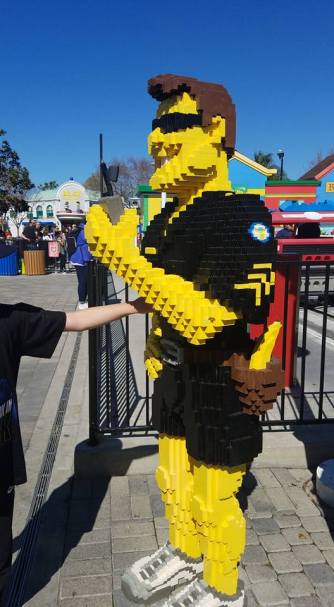 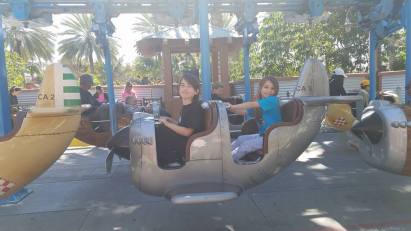 We purchased passes for Legoland, Aquariums, Madame Tousseau’s Wax Museums, and other neat places so we can have fun and be horrified all year long!

What else happened? Wesson turned EIGHT! 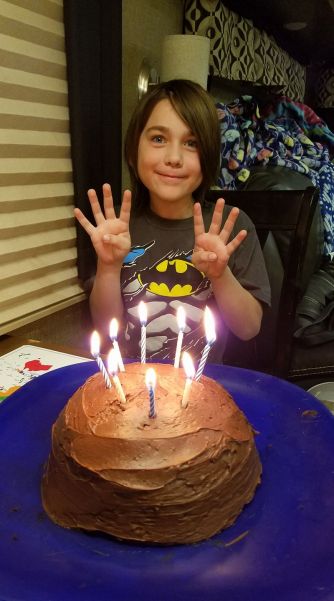 Oh, boy. Where did the time go? It seems like only yesterday that he was walking way too early (nine months old – for real), riding his big wheel down the stairs (Hey mommy, watch dis!), and asking if we can harvest the inner workings of Big Ben to build a giant robot. As for that last one, we agreed that if the clock were to be decommissioned – which is not probable – I would assist him in drafting a letter to the government asking for the spare parts. It’s what a mother should do.

The birthday boy requested lunch at Red Robin, a trip to Toys R Us for his birthday freebies, tacos and creamed corn for dinner, and to spend the afternoon at Coronado Beach. 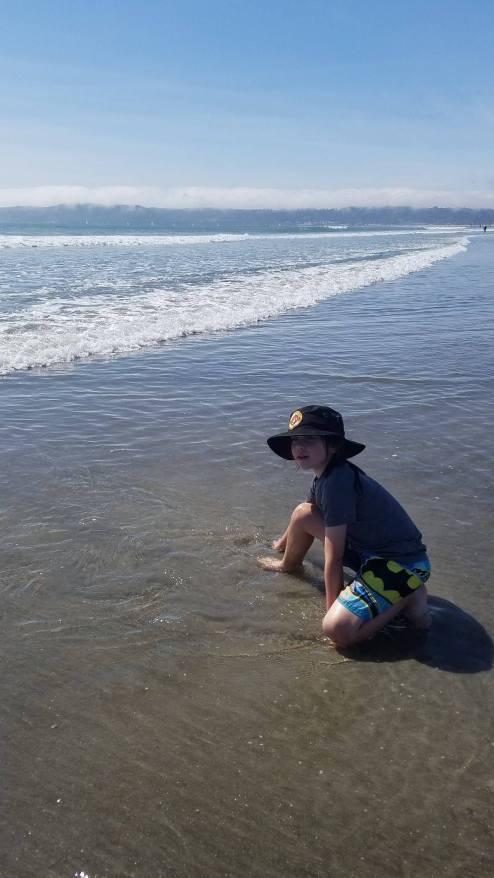 The kids ended up finding another set of kids who were wearing Marine Corps hats just like them! Instant friends! 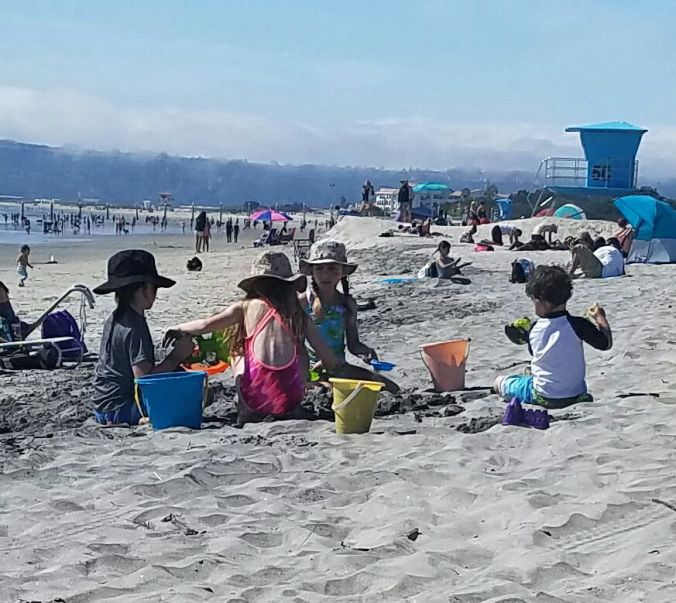 We all love this beach! Look how happy these little boogers are! 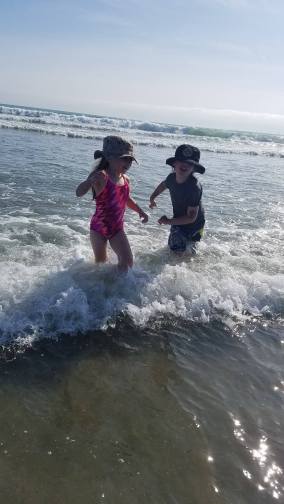 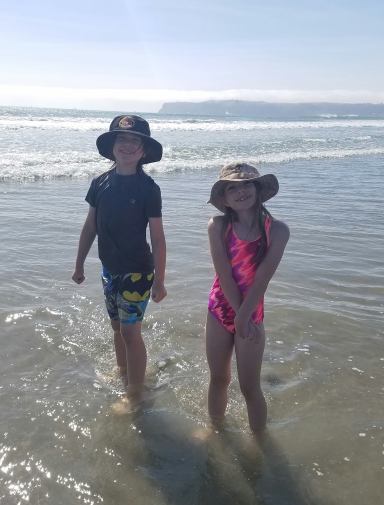