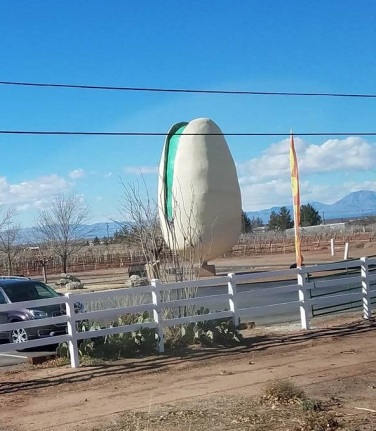 Here, have the world’s largest pistachio as a gift for reading this post.

We got to Amarillo pretty early in the day so we had lots of time. After the camper was set up we headed for Cadillac Ranch! We stopped at the local Wal-Mart and ended up on this bad boy: 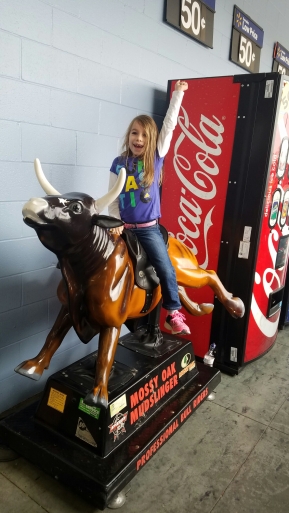 Cadillac Ranch is an art installation put together by some guys from an art group called Ant Farm. It consists of several Cadilli buried nose first, together representing the rise and fall of tail fins. They are all at the same angle as the Great Pyramid of Giza, oddly enough. They weren’t meant to be spray painted initially but it turns out everyone is totally cool with it, and the millionaire who owned the property where it lies encouraged visitors to the site so the gate to get there remains. Fun fact: the Home Depot in Amarillo sells the most spray paint of all the Home Depots. I think we were all really excited about Cadillac Ranch. It’s one of those places that we’ve read about a lot. Wesson was especially insistent that we go. 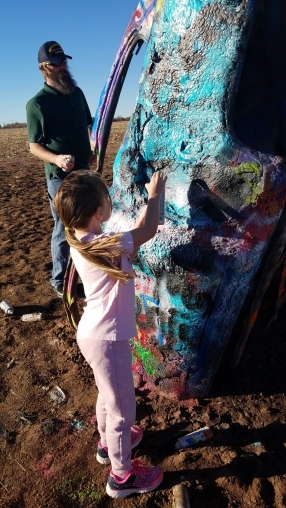 It was super windy and the field was a mud hole but we had a total blast! Mara was the only one to empty her spray can. The rest of us passed them off to a family that showed up as we were leaving.

We also ran into the 2nd Amendment Cowboy over at the Cadillac Ranch RV park, no relation. 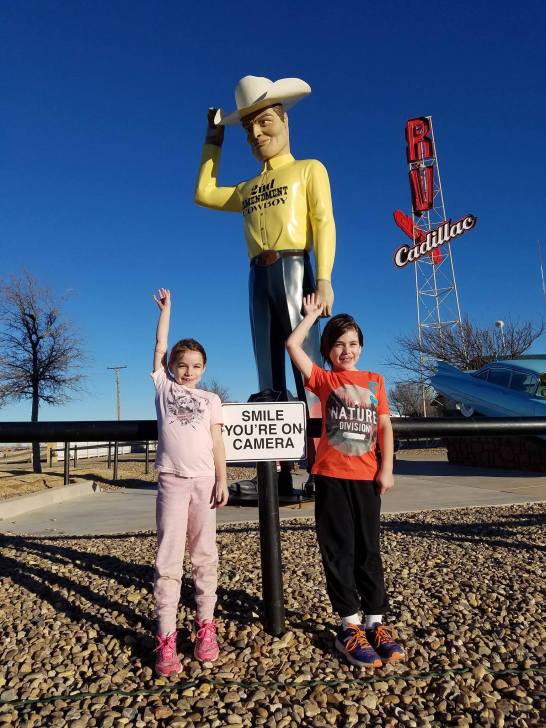 After we had expressed ourselves through the medium of spray paint we visited The Big Texan Steak Ranch. This place used to be on Route 66, when the Interstate rolled through they were suffocated right out of business. The only way they could continue was to move to the freeway. It’s a really, REALLY different place. It’s very eclectic decor included farting mannequins, taxidermy by the truckload, a live rattlesnake, a shooting gallery, and lots of horns from long horns -some of which you can buy and attach to the front of your vehicle. This is also home to the 72oz steak dinner challenge. The current record holder is a 120lb woman who ate three of these such dinners in twenty minutes. That’s all three within the same 20 minutes. *blort* 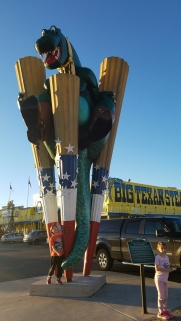 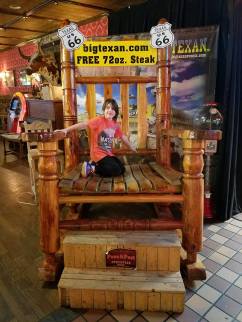 They also offer a free limo pick up service. If only we had known about it ahead of time…

Wesson was the only one smart enough to order a steak – which showed up INSIDE A COWBOY HAT! While we were eating our incredibly delicious dinner and sipping on a ten sample flight of house brewed beer, the musicians came by. This was my favorite part of the whole experience.

These two gentlemen sang and played their instruments to the tune of an old Hank Williams song. It was marvelous! I stopped eating and just sat there grinning at them like a weirdo. When they got to the next table a bass player joined them in a melodious rendition of “Amarillo by Morning.” They earned every penny they got that night. 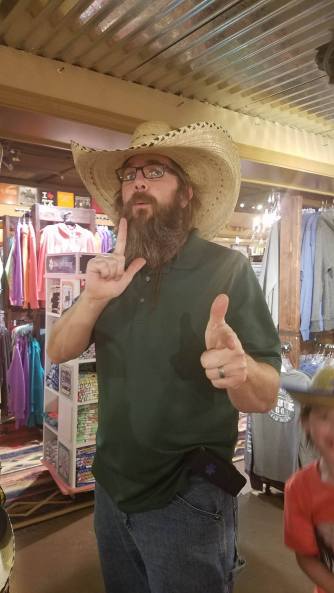 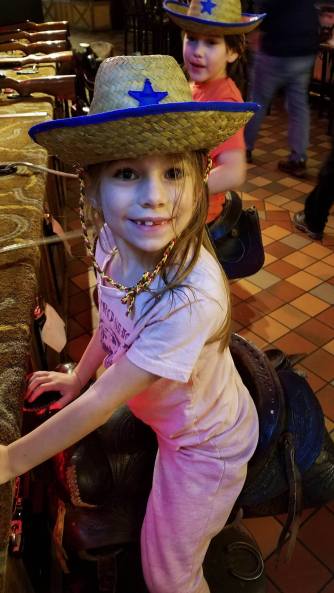 The next morning we were off again! We aimed for a little town called Elida, New Mexico but discovered we could totally get to Roswell by quittin’ time. We parked in another whelming (not over or under, just whelming) park called Midway. Just a little dirt with a lot of permanent residents but it was full hook up for less than $13 again! Here we learned that our auto levelers are absolute garbage in high winds. Too much movement in the camper and it can’t tell if it’s level or not. Isn’t that great?

We drove into Roswell for groceries and to poke around for extraterrestrials. The street lamps had alien eyes and the businesses all had kitschy names. It was total tourist trap. We managed to snap photos with these two visitors on our way home. 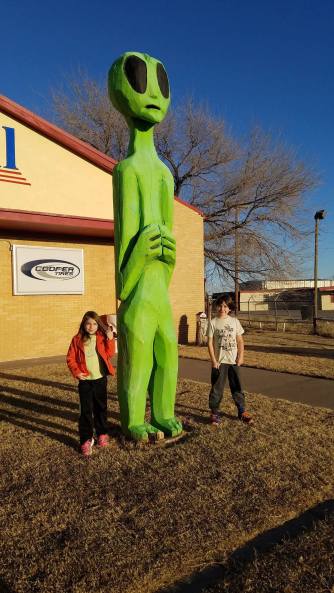 On the road agaiiiinn… The next morning we drove through the mountains all the way up to 7,500 feet above sea level and parked at a really neat looking museum complex. It was completely out of character for the area but just the space we needed to pop the slides out and make lunch. Plus BONUS! They had SNOW! Snow is not at all what I like to see. The kids, however, thought it was incredible and proceeded to fill my pockets with it. They also lobbed snowballs at each other until their little fingers couldn’t take it anymore. 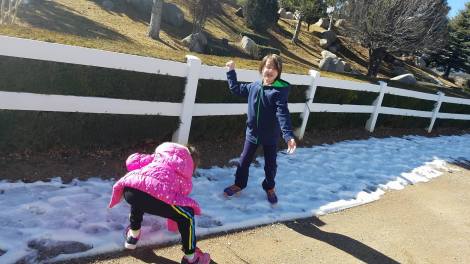 Shortly after we went inside the camper another rv parked right next to us – and they were from Michigan! They were traveling virtually the same exact route we were headed. Small world! 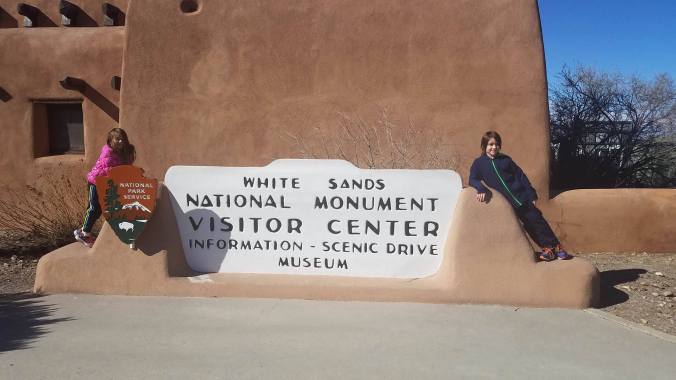 Our route took us directly past White Sands National Monument. We had initially written this into the schedule but the weather was supposed to be crappy. The weather was, yet again, all lies. It was gorgeous when we arrived! The gift shop sold us a couple of sleds and some wax, which was a complete scam and they made money hand over fist on these little disks. It was $17 for a sled, they buy them back from you for $5, resell them for $10, and will buy those resold sleds back for $3. Wax was $2 and was a 75 cent buy back. I found it, guys. This is what funds the National Parks system. 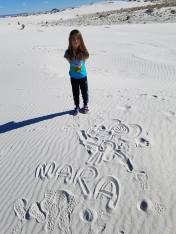 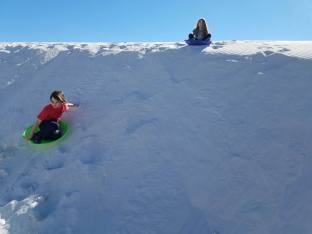 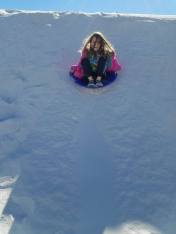 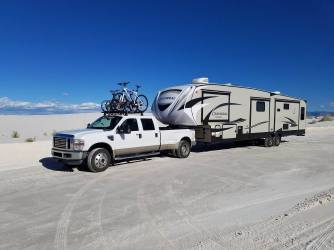 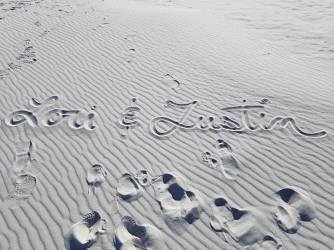 The sled scam was totally worth it, though. We drove out the the sand dunes and picked a good spot with a nice, steep hill and started throwing ourselves down it. The sand was soft and dry and the sun was warm. The whole thing was amazing!

PS – the sand here is actually gypsum: calcium sulfate with two molecules of water! Exciting for me, possibly exciting for you? Eh, it’s my blog, I can be excited about the main constituent in drywall if I want to. 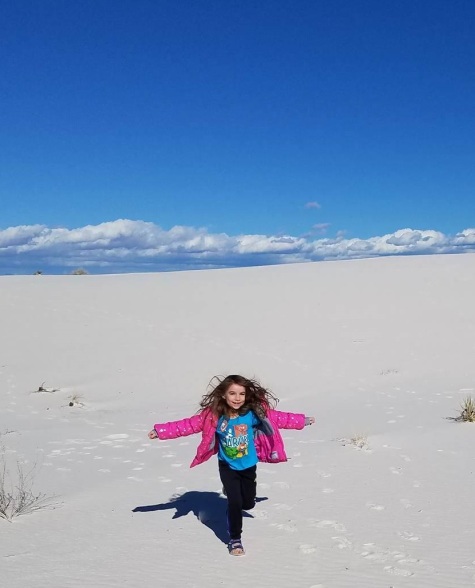 This was an experience that we will treasure forever. I truly hope the kids remember this one when they’re bigger. That’s why we document things, right?

3 thoughts on “Amarillo by morning”