We’ve been crazy busy for the last few months pouring our blood, sweat and tears into the house so that some other brave soul could come along and call it home. I once described it as having a 60 hour per week, seven day a week job that broke my spirit day in and day out. The children took the brunt of the madness, being ignored for the sake of getting things done. If one word could describe those two months it would be neglected. Neglected projects we had to finish, neglected children, neglected sanity. Document the good and the bad, right? We’re back from the madness, though! We barely know what to do with each other now that we aren’t so busy.

The house went up for sale on August 26th, and in six viewings and less than three days we were under contract. We’ve spent the last month doing the back and forth dance that is selling your home and I am happy to say that the closing date has FINALLY been scheduled for next Thursday. I couldn’t put enough a’s in my YAAAAAAAAAY if I wanted to. In the month we’ve been waiting, we went on a few adventures. Let’s share!

Cumberland Point Campground was our first outing. We scheduled this trip so that we wouldn’t be in town when the house was being shown. It was extremely awkward and off-putting to have people traipsing through the house while we were here. We left for a few, we hid in the camper for some like creepers. By the time we left for camp, though, we were already under contract. This is what we woke up to every morning: 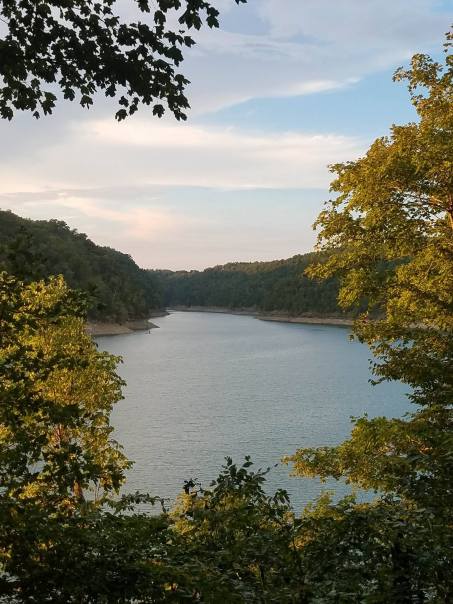 What. A. Dump. Waking up on the lake every day was the best. We took the opportunity to  hike down to the rocky beaches on the peninsula we were occupying. I say ‘hike’ like we aren’t a family of small children and people with foot problems. 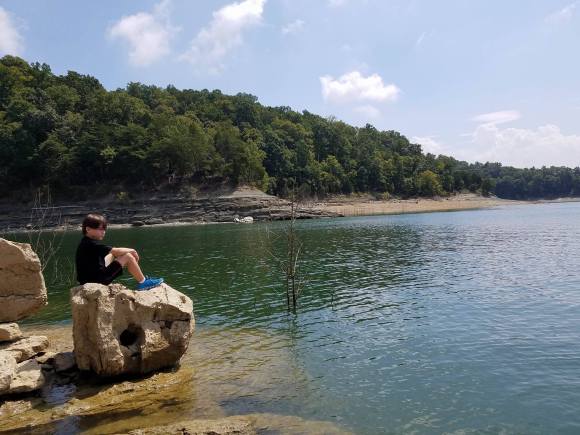 Look at the tops of the trees left from when the dam flooded the area!

With the exception of a few that showed up on the last day we were basically alone in this camp with another couple who happened to pick the spot right next to us. Our lucky RV neighbors, Jim and Laura, were a retired couple who were on the tail-end of a trip to Canada. They were the most helpful, kind, wonderfully social people with the best booze. We picked their well-traveled brains all week long. With any luck they will be at their home in Texas when we get down that way. 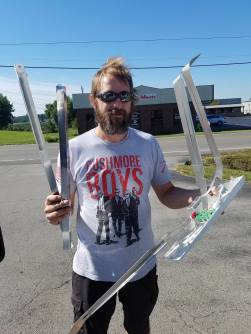 On our way out of the campground the TV antenna was assaulted by the wind or maybe a tree. It definitely didn’t break off because we left it up. We’d never do such a thing.

After a few more weeks at the house we packed up and moved to a little campground in Georgetown Kentucky called Whispering Hills. There wasn’t much whispering and the hills were missing, but the campground was decent. It was nice to have a full hookup in the camper. We ran both air conditioners and used our own shower! I even plugged in THREE things at once. It’s the little things in life that keep us going. Other than a donkey on the nearby farm that wouldn’t shut his donkey hole HEE HAW HEE HAW HEE HAAAAAW (always in threes) it was quiet, and that was just what we needed.

Trying out our new fishing poles

I wish i’d have had the washer/dryer hooked up already but because we didn’t I ended up chatting with a wonderful woman from Pensacola, Florida when I went to do the laundry. She started in right away, like I was a cousin she hadn’t seen in a year or two, and filled me in on everything the family was doing. She and her husband were headed up to Ohio to meet some people they had met on a previous excursion. Although I cannot remember her name, she was a wonderful laundry companion and I hope we see each other again down the road. I would have pegged myself as a hermit and an introvert, and I still kind of do, but it turns out that I love to chat up a stranger. Who knew?

At the end of the week, with no closing in immediate sight we resigned to the fact that we’d have to go back and sit at the house again. Then, the stars aligned and gave us a date. We’ll be here until next Thursday. The REAL adventure begins!!! For whatever reason that old Cheryl Lynn song popped into my head just now, funky beat and all. “What you think ah! What you feel now! What you know ah! To be real!” It’s real, y’all, and it’s finally happening. Hold me.

3 thoughts on “The countdown has begun! Or began already? It’s happening, let’s just go with that.”